Most mountain trekking is on gentle slopes made difficult by uneven paths, stones, and fallen trees. But the trails are along ridges or following streams, with the steepness of the paths gaining a few feet in altitude for every ten or hundred of feet forward.

But when the trail reaches the spots between the streams and the ridges, where it is forced to climb to reach a pass between mountain tops, the gain in altitude exceeds the gain in forward movement.

Going straight up these climbs to the pass would have shoes and horses slipping backward and cause erosion where rushing rain and snowmelt follows where feet had trod.

Enter the switchback. The same as skiing back and forth across a slope to keep your speed in check, the switchback runs across the hill at a reasonable grade, then makes a 30 degree turn to run back across the hill. Repeat as many times as needed to reach the mountain’s ridge.

Between mountain peaks there are slopes covered with shale — the rock that has broken off the granite walls thanks to hot and cold and storms and lots of time.

These broken rocks stop sliding down the slope between mountain peaks when they reach their angle of repose, where any object sliding down a slope finds its unique spot where it no longer slides on the steepness of the slope.

The rocks have found their place to stop sliding — but only barely. Just like an avalanche, any disturbance will get the scree moving down the slope and the larger the disturbance the more scree will get moving.

A larger disturbance like, say, a boy and a horse slipping off the narrow path of a switchback and tumbling onto the scree-covered slope.

It was early to rise the morning after sleeping in an unknown military barracks somewhere in Connecticut or Rhode Island. The handsome guy who had offered me a bed gave me a ride back across the border to Massachusetts and a highway heading east. I stuck out my thumb.

Massachusetts is a long state, some 250 miles west to east, but I remember nothing about getting through it. No hunger pains. No particularly long waits. No particularly memorable rides (as long as you don’t count the three fast-driving, heavy drinking party jocks who pulled up in a convertible. I didn’t feel safe refusing a ride, so I joined the guy in the back seat, held on, and shut up. Fortunately I was too boring for them to put up with and they soon told me they were turning off the highway. I was glad to say thanks for the ride and once again be alone, terra firma solidly under my feet). 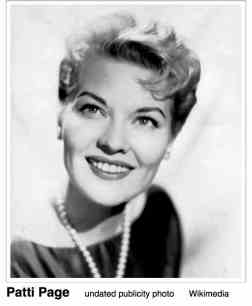 The only reason I had lit out across Massachusetts was a Patti Page song. In 1957 Patti put Old Cape Cod to vinyl, an act which no broadcast system could resist. Radios treated us to it every hour while every TV variety show had its own black-and-white set of a seaside restaurant to feature their star crooning —

If you’re fond of sand dunes and salty air

Quaint little villages here and there

You’re sure to fall in love with old Cape Cod

If you like the taste of a lobster stew

Served by a window with an ocean view

You’re sure to fall in love with old Cape Cod

Twelve years after Patti first sang of quaint villages and salty air, the song was still stuck in my head. I followed it east, to the tip of a long, long state. A tip, it turned out, that was a long, long cape.

One wild ride and being impressed with how long Cape Cod is. Those are my recollections of hitch hiking Massachusetts.

Don’t take my word for Old Cape Cod getting stuck in one’s head. Check it out — https://www.youtube.com/watch?v=HT2ao0rcxoA