They die coming down.

This wisdom was a variation of our parents’ instructions that we kids were free to run up all the hills we want, but don’t let them catch us running down!

Whether it be a hill or a mountain, going down is when people are tired. Gravity is making it ease to get going too fast. And if you fall you do not fall a few degrees into the ground and rocks in front of you, you fall well over ninety degrees, through space, picking up speed until you hit the ground and rocks sloping away, where you keep sliding, scraping off skin and perhaps hitting your head on a rock to stop you.

Climbing Snowyside Mountain there were saddles between the smaller peaks before we reached the final summit of the mountain. One of these saddles was very narrow, with loose shale rock sloping steeply away from a path that was only a foot wide. The shale on both sides formed long slopes of scree that would not stop sliding out from under us should we slip onto it.

I remember this narrow path as some six to ten feet long but it might have been four. 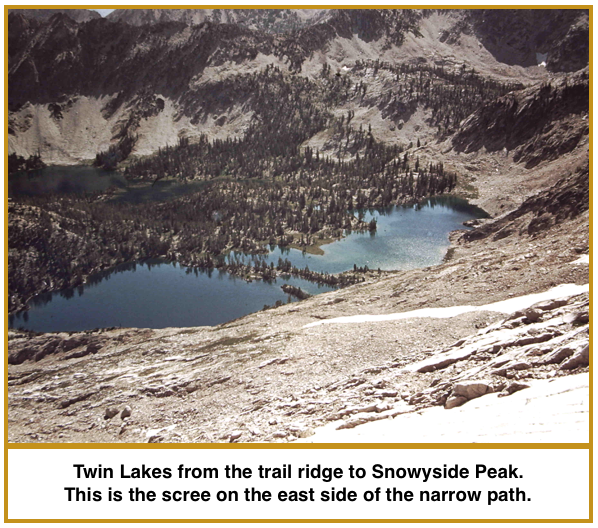 Dad paused when he first saw this dangerous path, but his determination to get to the top of Snowyside let him judge Vicky and I as old enough to understand the danger. We three sat down and, legs dangling on both sides of the path for stability, inched our butts along until the danger had passed.

After reaching the summit and counting fifty-two lakes we headed down and again came to this narrow path.

Not one of us hesitated. We walked right across it!

Need I say more about how mountain climbers perish?

My dad had climbed 9,363 foot Greylock Mountain in Atlanta when he was a kid. 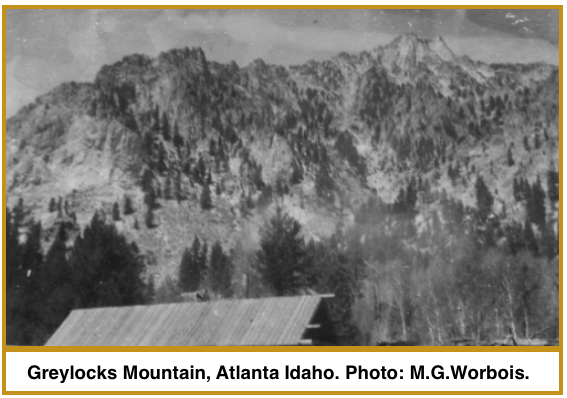 I have a photo of him sitting atop a radio tower on Shafer Butte, a mile above Boise, when he was in his twenties. 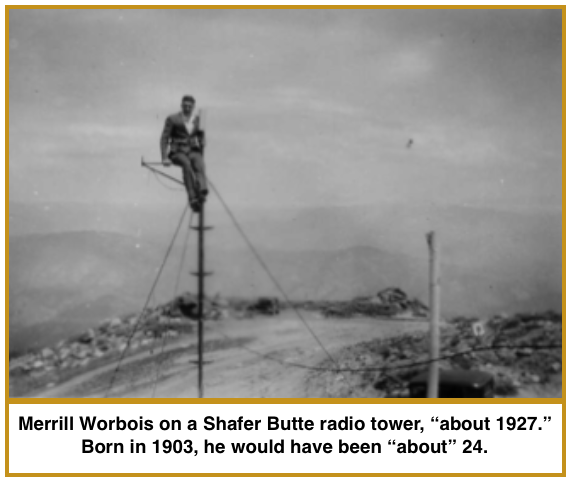 He had something about getting up and looking around.

In the 1950s he found out that from Snowyside Peak in the Sawtooth Mountains you can see right through the clear waters to the bottom of fifty-two lakes. Yea, there were some “difficult spots” on the climb to the top. But from what he heard the peak was easily reach by following the ridge that rises from the Alice-Toxaway Loop Trail.

At 10,651 feet, Snowyside is the fifth highest peak in the Sawtooths. In 1955, when I was ten, our family of five broke camp at Toxaway Lake, loaded up the pack horses, and set out for the day’s adventure of checking out those fifty-two lakes. 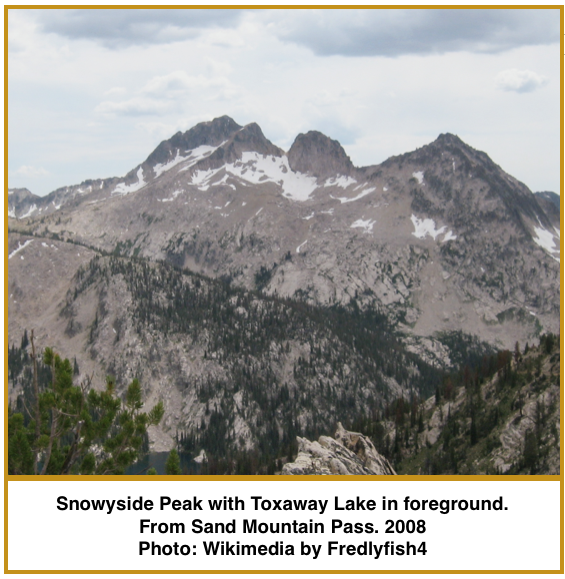 Mom and my little sister made it to where the faint trail up Snowyside’s ridge gave way to rocks, bigger rocks and then boulders. Mom never was comfortable with heights and my sister’s legs were too short to get over the increasingly large stones so they decided to hunker down out of the wind.

My big sister Vicky, dad, Flip the dog and I pushed on.

I remember approaching the top of several peaks only to have another, higher peak appear just ahead. Those jagged high points before Snowyside Peak were a source of great disappointment and consternation. 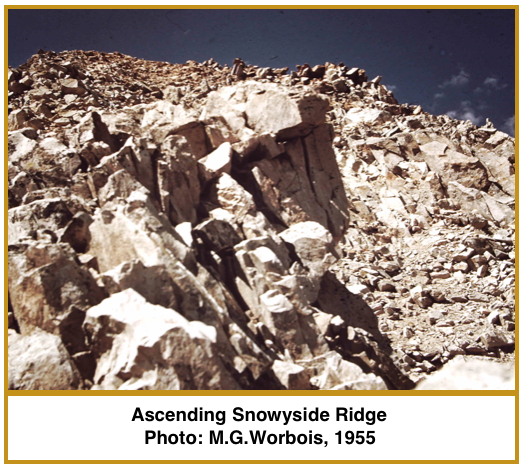 Then we came to a vertical wall that stopped us. Dad considered a way around but the slopes were too steep and covered with dangerous scree. Yet looking through fifty-two lakes was calling and soon Dad was pushing from the bottom and Vicky and I managed to scramble past the obstacle. Dad was tall enough and reached the scramble spot on his own.

Unfortunately Flip was a dog who never did follow instructions. And, to be fair, his lack of opposable thumbs for scrambling made his lack of obedience mote, so poor Flip was left behind. We were sure he’d be in the same spot waiting our descent.

The wall turned out to be part of the final assent to the summit of Snowyside Mountain. Soon our eyes were watching the slope in front of us give way to every increasing open sky without another peak taunting “not yet you haven’t reached the top.”

And right there at the top of Snowyside Mountain was a slobbering, smiling, tail-wagging Flip imploring us to come look-see!