It was darn cold and wet when the maple trees started running sap. And run they did! I was 25. I was at Buck Brook Farm in the Catskill Mountains, a hundred miles north of New York City.

Having been raised in the evergreen forests of Idaho, the early spring of 1970 was my first exposure to turning the sap of maple trees into tasty syrup.

I had spent 1969 in the Northeast, enjoying the different leaves and barks and branches of trees I did not know the name of. But when the trees started rising their sap from roots to budding leaves it was easy to pick out the maples — each one had a little peg on its trunk, like a pecker taking a pee. And every peg was easy to find — it sported a galvanized bucket hanging from it. 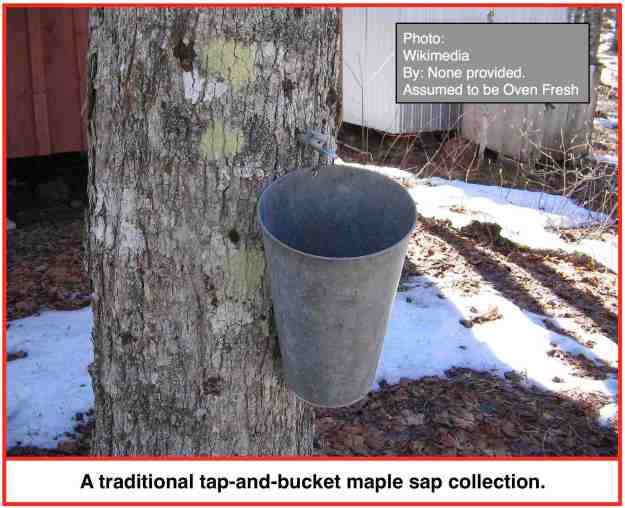 At least they did at Buck Brook Farm. We were a school keeping kids involved. Commercial operations had miles of plastic tubes draining the sap to common collection points but we made use of the tradition of wearing kids out by carrying buckets.

My first astonishment with gathering maple sap was how fast those trees run it out! I had enjoyed years of visions of a leisurely drip, drip, drip as the pegs lovingly extracted the sweet liquid. Now that I think about it my assumption of collecting maple sap would have filled a bucket every two days or so.

Folks, that’s not how these mighty trees move their life-giving liquid. What was coming from the pegs was not a leisurely drip. Or a drip at all. It was a steady stream. Think turning  your faucet just past drips. A thin stream, yes. But far from occasional drops.

For two weeks we were kept busy carrying buckets of maple blood through the forest to our pickup, where larger tubs were waiting to be filled and carried to the fire.

Carried to the fire? We’ll explore that next time. For now let’s just say what was running from the pegs was not syrup, folks. It was thin as water. But oh, what delightfully sweetened water!