NOTE: this is the third in a series of stories. If you have not read the second of these stories I strongly recommend you do before reading this one:  Second Stomp 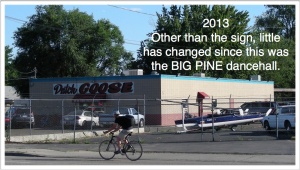 My most fond memory of dancing happened in the mid-1970s, after I’d returned to Boise from my roaming days and when I was a student at Boise State. It happened at the Big Pine Tavern, now the Dutch Goose, near 36th and State in Boise. It is within blocks of where I grew up.

Two friends and I, Dorothy Burrows and Bev Fickle, spent many nights at dance haunts all over Boise. I was also a member of new theater troupe, Theatre in a Trunk, organized by Randy Krawl. Randy’s parents and he were a dance band with a weekly gig rocking out the Big Pine, so Dorothy, Bev and I went to check it out.

The Big Pine lived up to its name—a huge room, the front third dedicated to a bar and pool tables and one COLOR TV for when a game was on one of the four channels we had back then. The back two-thirds of the bar was mostly dance floor, with tables stuffed around the sides and a small stage at the far end. As was the custom, the place reeked of stale smoke and beer but soon the sweat from overcrowded dancers canceled that out.

The Krawl family band played the classics, leaning toward western and occasionally rocking the floor with a fast rock tune played to keep the “kids” happy.

The floor was always packed and behaved like old-fashioned dance floors did, where everyone danced in a huge circle, two steps forward, one back, creating a gyre slowly moving counter clockwise if viewed from above. Fast or slow, swinging or holding tight, everyone kept pace with everyone else as the floor rotated to the music.

And the floor was filled with every age. Eighty year olds were dancing with their sweethearts, possibly from high school. Parents danced and teenagers danced. It was not unusual for an oldster to mention, “You sure can keep up with that,” as we kids were returning from the nightly rendition of Wipe Out. Nor was it unusual for we kids to tell the oldsters how smooth and fine they looked as they returned from a song we had heard back when mom and dad were watching Lawrence Welk. But for the most part we were all dancing to all the tunes. It was a family of humans sharing our common bond.

It was, indeed, a stomp, just as I had remembered the dances from my childhood. And it happened every weekend. Dorothy and Bev and I became regulars and we began bringing friends.

One of those crowded Big Pine nights our table had grown to seven or eight and I was making sure all the ladies had their turns on the floor, including a newcomer who had been talked into joining us by friends of friends.

She was a lovely dancer, catching every dip and feeling free to let me know what her feet were in the mood for. By the third dance we were sliding through every hole between dancers, finding our own room for moves large and small. Like silk in the breeze, we responded to every tweaked hip and flipped foot and dipped shoulder. There was no leading and no following. The music filled us both and we both responded exactly the same way. I remembered the Stanley Stomp from my childhood. It was deja vu all over again.

And, yea, we talked. She was in town, studying. She was moving back to where she’d come from, back to eastern Idaho. We danced and I thought about it. And I felt it.

The next time we were on the floor I put my arm across her back, holding her beside me as we strolled forward to the beat of an easy Western twang.

I said, “You know, when I was in the sixth grade my folks took us to the Stanley Stomp.”

For the first time I felt her step faultier. I swung her into myself, left hand raised, swaying in the classic posture.

“I asked a little girl to dance and I’ve never danced with anyone like that since. She was from some place that could have been the other side of the moon for all I knew, although she did her best to tell me where Rexburg was.”

Everyone else had to dance by. She couldn’t move and I didn’t want to.

Then, simultaneously, our feet caught a beat and, once again, we danced the night away.