This is the first of a four-part series. A shortened and greatly edited version of this story from my experiences first appeared in Scott Pasfield’s book of portraits, Gay In America, 2011, Welcome Books, an imprint of Random House.

On the edge of a Western town in the ’50s, when time was not yet divided into school days, the game of Doctor captured my eager attention. The neighborhood girl and I seemed quite good doctors and our practice was always open. The neighborhood boy and I proved equally adept.

The neighbor boy’s grin and excitement remain vivid in my memory as he promised, pants around our ankles, “I’ll suck yours if you’ll suck mine.”

There is a memory of feeling and watching as he went first. And there is a stunning awareness—in high-definition and complete three-dimensional precision—of the moment I felt him in my mouth. There is the smooth texture, warmth, and light smell. There is the summer dryness and dust in the air. There is the light filtering through the blackberry bushes twisting through the logs of the shed we were in.

We played until he started school a year ahead of me. He became the “big boy” and seemed filled with interests other than private playrooms. Little by little I convinced myself he wouldn’t want to play right now and before long the ability to ask was driven behind a wall of reasons to put it off.

The habit I started with him became my habit with all the guys. Not that I didn’t try, but at that early age interest in sex didn’t seem prevalent in the other kids and I took disinterest to be rejection.

Soon the more I wanted someone the more impossible it was for me to bring up the subject. Words like queer and ferry began entering sexual talk and they were not used in fun ways. I found myself afraid of the guys I lusted for the most. Afraid of being beat up. Of being bashed. Inside I was running frightened, a coward digging my hole, as addicted to talking myself into rejection as any heroin user watching himself cook up another pipe.

Making cowardly decisions is not something one walks away from. I carried it with me the day I graduated from high school and moved to Los Angeles to become a movie star. With a bag of clothes and a hundred dollars, I stayed at the downtown Y before moving to a seedy neighborhood and walking several miles to a job on Sunset Boulevard. Walking in my neighborhood during the mid-60s I didn’t think much about the sound of gunshots when the LA riots broke out. There were three years hitchhiking around the country, sleeping under bridges and taking rides from anyone who stopped. There were times in bars where it was so dark my only sense was feel and there were times walking the streets of lower Manhattan at four in the morning. Yet always I was a coward. Avoiding the crowd if I could. 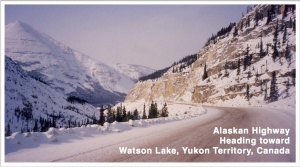 Why didn’t I talk with or proposition that man I was so attracted to? Always a coward. Always letting a fear of being bashed get in the way of my freedom.

My fear was to come true. Fate held my rodeo on a bar parking lot — Yukon Territory, Canada.