The gentle, blue-blooming saddle between the trails of Mattingly Creek and Alturas Lake Creek is a ten mile hike from Atlanta and seven miles from Alturas Lake.

The ten miles from Atlanta were filled with all variety of gentle and steep trail, narrow and fairly open areas, and views up rocky peaks. All I remember of the seven mile trail down Alturas Lake Creek was a gentle slope on reliable sand and gravel. All down a wide mountain valley. 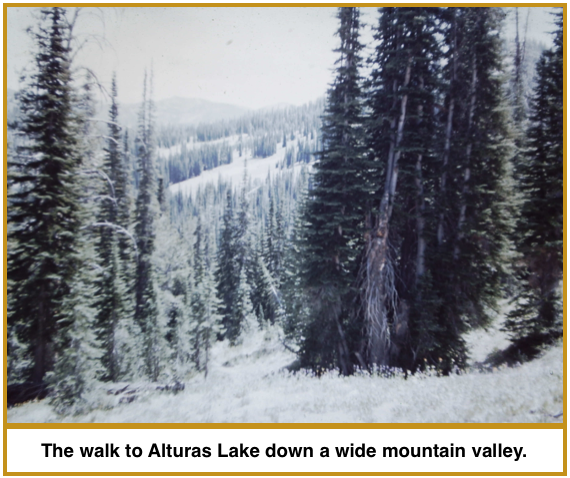 I also remember when the trail became a dirt road with two ruts rather than the one option of the path. I was convinced the lake could not be far away and remember my disappointment when the lake never seemed to appear. 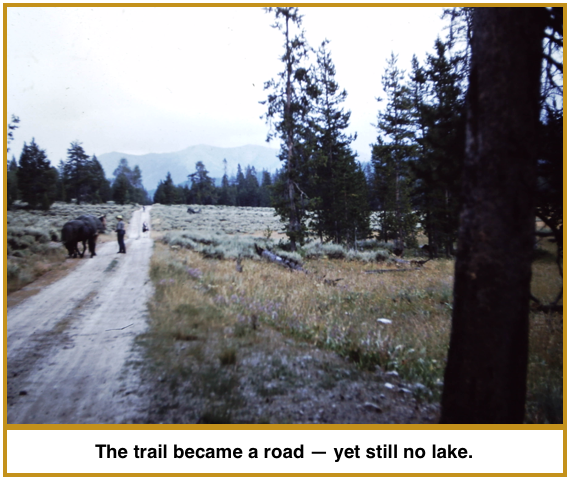 But appear it did, although still a long way in the distance. And, once we did finally get to it’s shores, I found out there was still the walk along the north side of lake to get to the campground. It was a long, long walk. 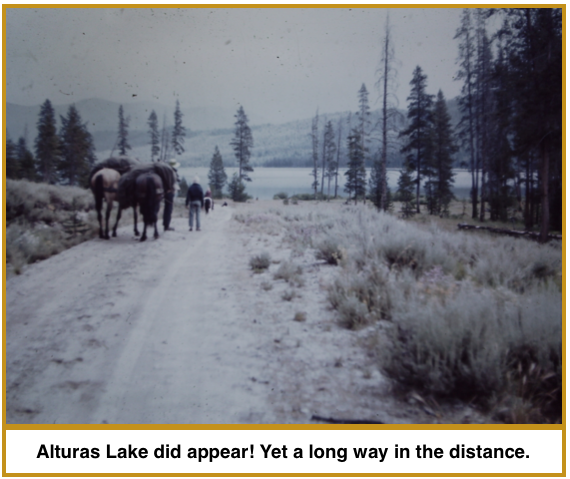 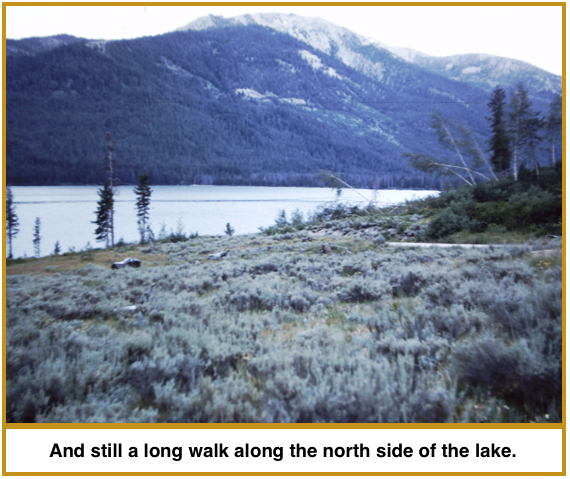 The campground was filled with trucks and cars and all sorts of tents and gear. We made quite the entrance, walking through with three horses, three kids, and Mom and Dad. We had barely settled on a spot and started pulling the packs off the horses when other campers were joining us and asking questions. 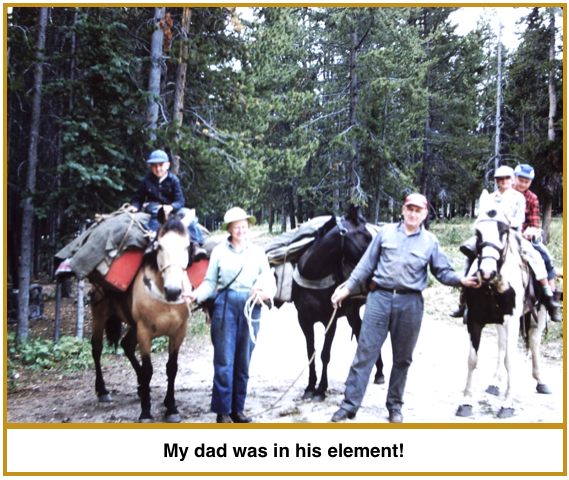 My Dad was in his element!

Now that I think of it, these sixty-two years later, I’m not sure but what the attention Dad knew awaited when he came into the campground, fully loaded as a horse-packing family, was one of the reasons he’d drempt the entire trip up.

Fall was gathering ‘round us in Frost Valley and once again I found myself surrounded by natural wonders that were new to me.

Having been raised in the deserts and pine-covered mountains of Idaho I was not aware of tourist industries based on people looking at forests full of colorful trees. But now, as I fed the estate’s fish and mowed the fields and cleaned up the garden, I found myself increasingly scanning hills no longer green but pocked with reds and oranges and yellows. And then reds and oranges and yellows pocked with green. Eventually the green was gone. 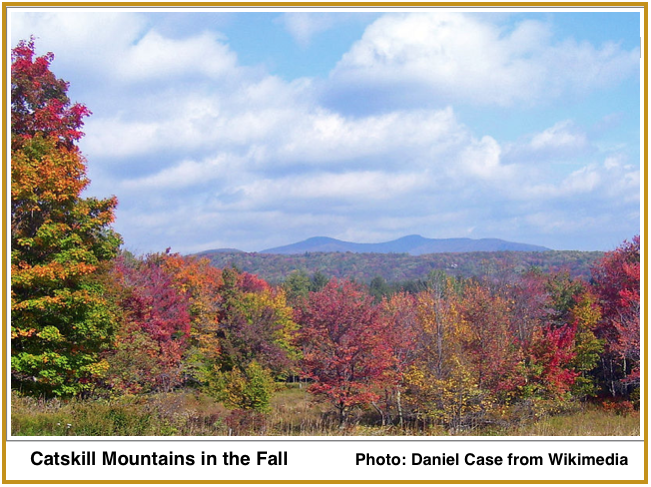 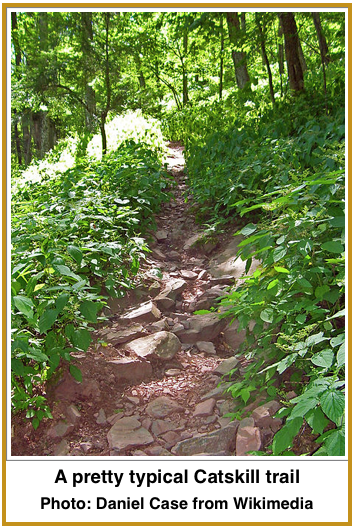 One of the estate’s grandkids and Bud and I decided to check out this splash of Autumn in Upstate New York. I drove the estate’s Suburban up Frost Valley to the trailhead at the ridge of the Catskill Mountains. From there we took off on the trail Bud and I had taken when we ended up freezing under the brand new invention of a space blanket. I believe it was the trail to Slide Mountain — at 4,180 feet the highest point in the Catskill Mountains.

Eventually rocky ledges began to appear. These were not above the treeline where no trees grow, like I knew from Idaho. Rather they were flat, solid rock ledges that jutted out from the forest before falling off at a cliff. These cliffs were higher than the trees below and offered views over the surrounding forest. Before these ledges all we had seen were tree trunks beside the trail with color between them. The old can’t see the forest for the trees … 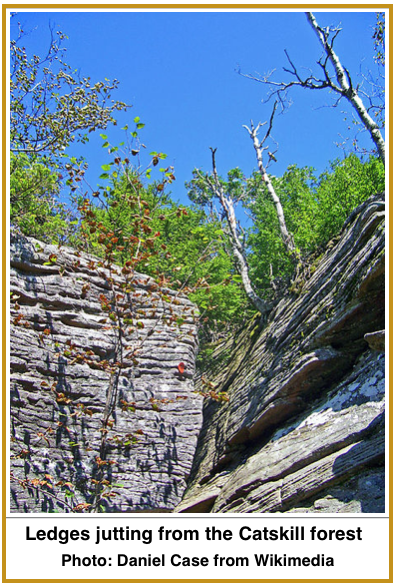 Well, folks, there is a reason tourists check out the hardwood forests of the eastern United States in the fall. The rolling Catskill were resplendent.

That night we were laying in our sleeping bags telling stories and feeling a mild wind when we noticed something odd in the sky. We got up and checked out faint, huge balls of glowing light fading in and out in the far northern sky. They were silent. Their light was like the eerie, soft light of fireflies. Their light also slowly increased and decreased like the light of fireflies but much bigger and, perfectly proportionally, much slower.

While firefly light is definitely golden yellow this light was a muted aqua green.

We got up and sat on the rocky ledge of our camp, tucked into a crevice that blocked the breeze. There, wrapped in sleeping bags, we listened to the wind and watched the Northern Lights.

I don’t remember Seager or getting out of the car or what the beginning of the trail looked like. Nor do I remember crossing the headwaters of the Beaver Kill river. But I do remember snippets of a beautiful springtime path cutting its way through mountain meadows and hardwood forests, fresh in the bright green of new leaves.

I remember the path — just wide enough for a single pair of legs and largely obscured by the tall grasses and wildflowers crowding in on both sides.

And I remember a particular wide opening in the forest with dead timber and boggy ground where the gentle climb eased over a generous hump and began to descend.

I was not sure where the path was descending to. It was all a guess, taking off on this path having seen no map that showed it. But it seemed to be going in the right direction. And it was a path so it went somewhere. If it petered out I could always turn around.

It was a path with no footprints, so it could have been an animal path, but that never crossed my mind. The path had started at a road. It would come out somewhere and I could figure out where to go from there. It made no never mind to me where the path rejoined civilization.

In the meantime it was getting dark so I unrolled my cotton sleeping bag and ate a can of beans and crashed, glad it was the middle of May and not nearly as cold as the nights I had spent beside the roads in March and April.

The next day the little path continued to reveal itself — all running downhill. About noon I recognized the tree stump Bud and I had sat on chatting. I walked by the big old barn. Just past the barn I opened the door to their house and joined Stan and Lola for lunch. 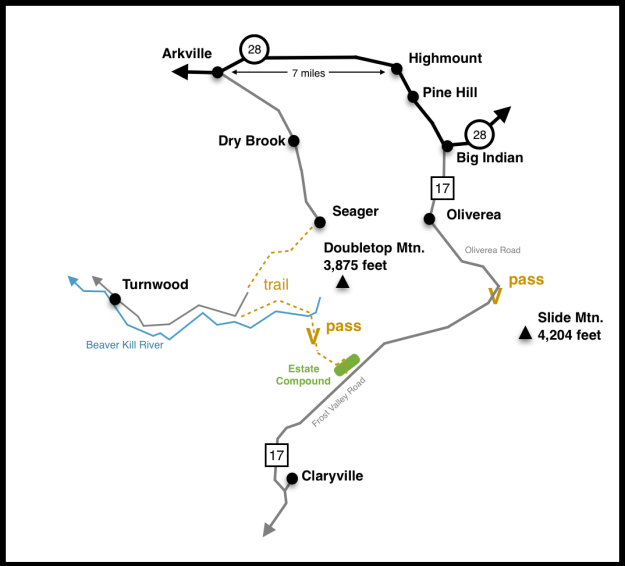 When I hung up the phone in Pine HIll I was mostly thinking about returning to Bud and Stan and Lola and the estate I had left in Frost Valley.

When at the estate, Bud and I had often walked up the rutted road that ran between their house and the hillside. Just a few yards past their house the narrow road passed a big old barn before turning left, into a gully that led into the hills. The road became two ruts and the two ruts gave way to a visible but not-well-maintained path. Stan had said the path went all the way over the ridge and through Catskill Mountain back country. Several times Bud and I sat on a stump where the road turned to path, visiting and enjoying the day.

As I returned to the road from the pay phone at the Pine Hill gas & grub, I decided to take the long way back to Frost Valley and see if I could find that little path that came in behind Stan and Lola’s house. I knew I had to keep going north and east and eventually drop south through the forest, but my map showed no paths.

I wish I could remember the names of those two spunky gals who picked me up as soon as I crossed the gas & grub’s parking lot. I thoroughly enjoyed their company and they seemed to enjoy mine. I’m guessing they were in their late twenties or early thirties and only as I write this have I thought perhaps they were looking for something other than a little daring-do, picking up a lanky hitch hiker to chat with. I’m so gay I miss all kinds of signals from the ladies, I’m sure.

Oblivious to anything other than friendly folks who seemed chatty and interesting, I told them about returning to Frost Valley and my decision to return the long way, hopefully on the little path I had been told crossed the ridge and led to the estate.

The gals looked at one another and agreed it might be the path that takes off from Seager. “At least it heads in that direction.”

I encouraged them to let me out whenever their route took off from mine and just point me in the right direction, but they would not hear of it. Rather, they insisted they take me to Seager and point out the trail. 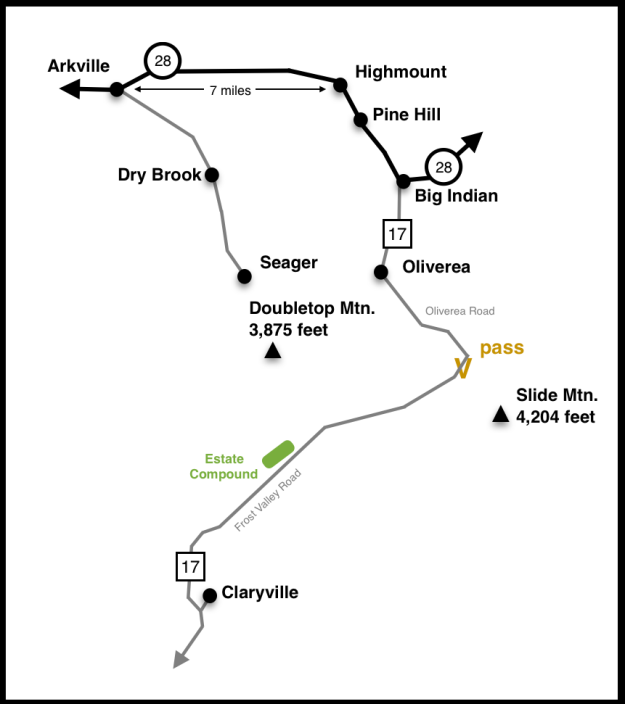 I became most thankful for their insistence. Seager, it turns out, is a once-active village that died with the tanning business. With just one home, I would probably have been carrying my heavy cotton sleeping bag some nine extra miles. And then I don’t know if I would have found the tiny path.