I finished my last blog telling about coming upon the Rip Van Winkle Bridge across the Hudson River some 120 miles north of New York City. 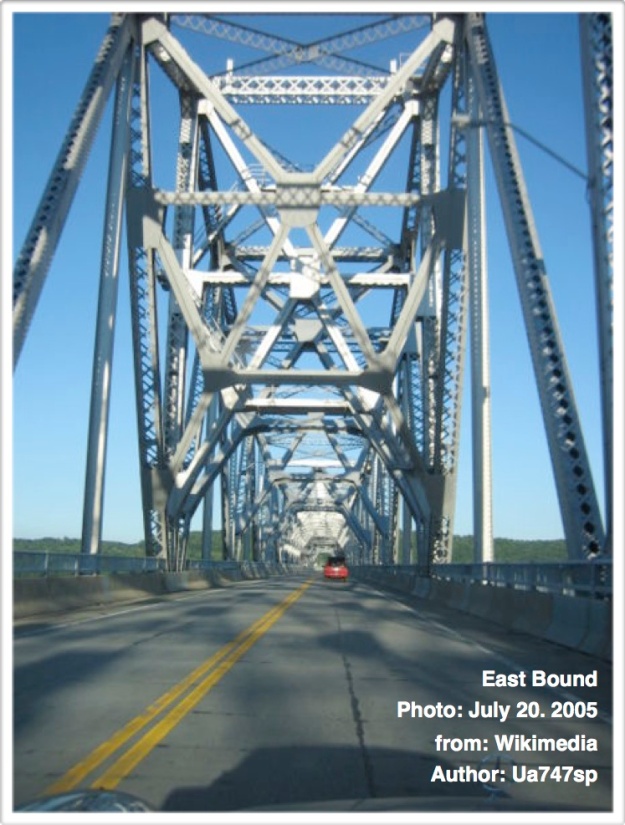 Besides it being free to walk across a foot path on the right side of this mile-long toll bridge, I finished up commenting on being fascinated by how far above the river the bridge is, how wide the river is, and how green the Hudson River Valley is.

But mostly I was fascinated by the fact that the Hudson River was FLOWING THE WRONG WAY ! !

It was flowing NORTH !

Over and over I worked my understanding of geography in my mind.

Surely the river does not flow from the Atlantic up to the St. Lawrence Seaway ? ? ? It just couldn’t be. I knew there were differences between the East and the West in this great land of ours, but I was pretty sure the side of the continent did not change the notion that water flows downhill!

Yet the Hudson River was right there, FLOWING UPSTREAM!

I thought perhaps it was some illusion caused by being so far above the water. But as I got to the far shore I checked and sure enough, there were grasses and branches along the shore that were being pushed by the current and they were being pushed UPSTREAM !

Alas, it was getting late and I needed to put that mystery on hold. At the time I needed to  got off the bridge, put out my thumb, and see what shelter may come along.

I immediately got a ride from a young military man who was friendly as could be and, I’ll admit, easy on the eyes.

After the initial pleasantries in his car I was waxing poetic about geography and rivers flowing up stream. He was from the area and explained, “It’s the tide.”

Wow. 120 miles from the ocean and the tide is pushing back the mighty Hudson River ? !  I’m from the mountains of Idaho and had no idea the tide could do that!

He explained that the river continues to flow under the tide and the sea comes rolling over it.

Wow. I’d always heard how mighty the movement of the tides is. Considering all the rivers and basins and bays in the world, that is a LOT of water and land sharing a twice-daily sloshing around with one another!

The power of it struck me just like that — the mighty mixing up of water, earth, heat, cold, light and dark that has brought a carbon-based organic celebration upon this watery rock we ride around the sun!

The handsome military man ended up providing me with a place to sleep in the barracks of his camp.

After being impressed with how effortless it was to get a hitchhiker to an empty bed on a military base I enjoyed a sound sleep of sloshing dreams.

Summer was drawing to a close but in a few weeks there would be chores to do on the Catskill Mountain estate I had come across in 1969.

There was a little time to go exploring and for no reason except having heard Old Cape Cod several thousand times on juke boxes and radios during my life I decided to get out my thumb and head across Massachusetts.

Avoiding freeways and towns as best I could, and conscious of being in the Catskill Mountains, I followed the little black lines on a map to the town of Catskill, on the Hudson River. It must have been a pretty easy journey for I remember nothing of it!

Nor do I remember much of Catskill the town. In fact I probably skirted the town itself, coming in on New York State Highway 23A and approaching the  Rip Van Winkle Bridge on the east side of town.

What an unexpected treat! Built in 1935, the Rip Van Winkle Bridge is an impressive structure. After miles of forests and fields this mighty steel cantilever bridge jumps the mighty Hudson River some 120 miles from the river’s mouth at New York City. The bridge has ship clearance of 145 feet, a full 14-story building, above the water. Of course, ship clearance is not as far above the water as the bridge is.

On seeing the bridge I found myself calculating how to get across it. I wanted to walk across to check out the Hudson River, but I’d been on many of these narrow cantilever bridges in my day. I couldn’t imagine getting over nearly a mile of such an enclosed structure while dodging cars by squeezing on the side of the decking.

Matters worsened when I got close enough to realize the bridge was a toll bridge, meaning booths with officials that would surely report a backpacker taking off on foot in front of traffic.

But then my heart sang. I got close enough to discover this mighty structure, built to let wheels roll over water, included a walkway — an isolated path all on its own, running on the outside of the superstructure that held the road.

My heart was even happier to discover the toll for walking was free!

First was how far above the river the bridge is. It crosses from above the bluffs beside the river, not over the river itself.

Second is how big the Hudson River is! Wow.

And, third, how green the Hudson Rover Valley is. Rivers are green in the desert West, but only along a few feet of their banks. Here all was lush.

My greatest fascination while walking across the Rip Van Winkle Bridge I’ll get to in my next blog.

• Built by the newly-formed New York Bridge Authority in 1935

• From Catskill on the west to Hudson on the east

• Lead paint removed and repainted in 2009

• Includes a separated walkway on the downriver side, closed at night

• Bikes can use the traffic lanes or walkway

• No toll for walkway

• Yes, it is named after Washington Irving’s short story