On our Sawtooth Mountain trek from Atlanta to Alturas Lake, one surprise for Mom and Dad came half way into the trail.

They had been looking forward to crossing a steep ridge at the saddle between Mattingly and Alturas Lake creeks. Yet as we got close to where the saddle should be they saw a pretty blue lake.

I don’t know about you, dear reader, but to most of us lakes belong in valleys, not straddling mountain ridges. Call me crazy, but water is supposed to run from ridges like caribou scamper from wolves.

Yet there, in the distance, was a lake right where a rocky ridge should be!

Getting closer we came to realize the ridge was not straddled by a lake. Nor was it a rocky spine. Instead, at 8,300 feet, a gentle curve crossed between the two creeks. And that meadowy curve was covered with a vast cluster of the bluest little Alpine flowers we’d ever seen.

It was a treat. 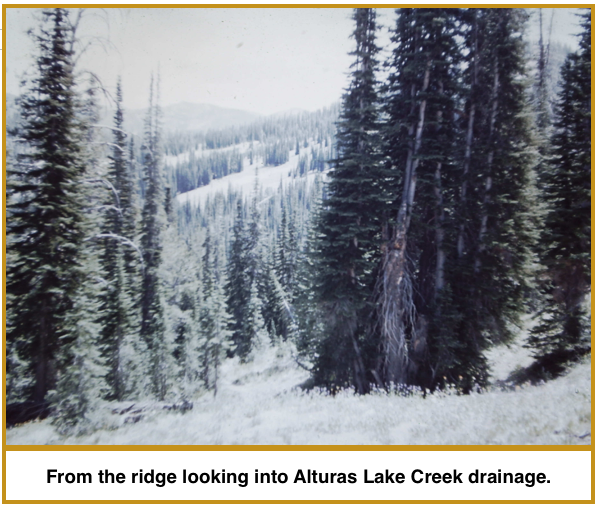 Years later, when the Idaho Transportation Department was looking for a direct route from Boise to the Sawtooth valley, Dad wrote many letters encouraging the route we walked that day. I’m sure he mostly wanted an improved, paved road to Atlanta, but his letters pointed out the advantages of the Atlanta – Alturas Lake route, including: 1) it was the most direct, 2) it was the most scenic, going right through the heart of the Sawtooths, and 3) building the route was simple, crossing the ridge in a gentle, flowering meadow.

The road was built by extending Highway 21 past Grandjean, around the north end of the Sawtooths, and into Stanley. But you can’t say my Dad didn’t do his darndest to talk some sense into them!